Father Tarazi, a prominent biblical scholar who has authored more than fifteen books and prepared Orthodox Audio Bible Commentary on the entire Bible (over 175 hours of recording), masterfully expounded the meaning of 2 Timothy 3:16: “All scripture is inspired by God…” The phrase “inspired by God” in classical Armenian is Asdvadzashoonch (from theopneustos in Greek), one of the words Armenians use for the Bible. After a very engaging and dynamic presentation, a lively discussion ensued.

The program began with the Lenten Service (Husgoom) from 7:30-8:00pm, followed by the lecture and Q/A (8:00-8:45pm), and concluded with table fellowship. Next Wednesday, Dn. Shant Kazanjian, AREC Director, will speak on “Bible Readings in the Armenian Church during Great Lent, Holy Week and Eastertide.”

On Sunday, March 4, St. Illuminator’s Armenian Apostolic Cathedral hosted a book reading by children’s book author Talene Dadian White. Surrounded by a group of about 30 children of various ages, Dadian White explained her connection with St. Illuminator’s Cathedral and her passion for writing. She told them how her parents and grandparents grew up going to the Cathedral and she was so happy to again be under its roof.

For the reading, Dadian White chose a book from her five-book series titled “Armenian-ized Classic Fairy Tale.” The books are written in English with some Armenian words. The children enjoyed Dadian White read from the story called The Gurabia Man that comes from the classic story The Gingerbread Man. Dadian White often stopped to ask children what the Armenian words meant and was met with wildly waving hands excited to respond.

A portion of all sales were donated to the Cathedral’s Armenian and Sunday Schools.

On Sunday, February 26, 2012, the St. Illuminator’s Cathedral hosted a lecture by Dr. Arthur Martirosyan, child protection expert and CPN representative from the Republic of Armenia. Dr. Martirosyan’s presentation, titled “Child Protection (CP) System and Problems in Armenia,” offered a comprehensive overview of child protection protocols in Armenia, as well as problems currently plaguing the system. The audience participated in a live online broadcast discussion with representatives of several non-profit organizations engaged in child protective services in Armenia. Topics included the condition of orphans and children living in poverty, and the extensive work that lies ahead as these and other organizations work together to better the lives of Armenia’s children.

The second of the six-part Prelacy Lenten program took place last night, February 29, at St. Illuminator’s Cathedral, presided by His Eminence Archbishop Oshagan. The speaker was His Grace Bishop Anoushavan, Vicar General, who spoke on “The Bible in our Worship Services.”

Bishop Anoushavan prefaced his presentation by underscoring the fact that the Armenian Church, in all aspects of her life, is biblical through and through. He then went on to demonstrate that fact in one area of the life of the Church—in the worship services of the Armenian Church, focusing on the hymns (sharagan). Srpazan Hayr first spoke about the structure of the Armenian Church hymns in the cycle of the daily services, based on the eight-mode system, with introductory verses taken from the Psalms and canticles from the Bible. He then showed the participants how our hymns either quote directly from the Bible, or allude to an image or echo an event from the Bible, using three different types of hymns—a penitential hymn attributed to St. Mesrop Mashdotz (Hayr pazoommoghorm, “O greatly merciful Father…”), a hymn from the Husgoom service (i ken haytsemk, “We entreat you…”), and a pre-communion hymn from Soorp Badarak (Orhnyal e Asdvadz, “Blessed is God…”). A lively discussion ensued after the informative presentation.
The program began with the Lenten Service (Husgoom) from 7:30-8:00pm, followed by the lecture and Q/A (8:00-8:45pm), and concluded with table fellowship. Next Wednesday, the speaker will be Rev. Fr. Paul Tarazi, Professor of Biblical Studies at St. Vladimir’s Orthodox Theological Seminar (Crestwood, NY), and he will reflect on “All Scripture is inspired by God…” (2 Timothy 3:16).

Last Sunday all Prelacy parishes held a Requiem Service for deceased members of the Armenian Relief Society. His Eminence Archbishop Oshagan presided over the Liturgy and the Requiem Service at St. Illuminator’s Cathedral in New York City. During the fellowship hour that followed the services, Archbishop Oshagan praised the ARS’s service and dedication to the Armenian community.

Archbishop Oshagan, a seasoned Bible translator, together with Archbishop Zareh of blessed memory have translated the entire New Testament and the Book of Psalms into western Armenian, which was published by the Armenian Catholicosate of Cilicia in conjunction with the Bible Society of Lebanon (1993), a translation used in public readings in our churches, as well as in private devotion.

His Eminence then turned his attention to modern Armenian translations, in both eastern and western Armenian dialects, translations made by Armenians and non-Armenians. He spoke about different schools of translation, their advantages and disadvantages, giving ample examples. The purpose of translating the Bible, then as now, is to make the Word of God available and understandable for the faithful, said Srpazan Hayr. A lively discussion ensued after Srpazan’s informative presentation.

The evening program also included Lenten Service and table fellowship. Next Wednesday, His Grace Bishop Anoushavan, Vicar General, will speak on “The Bible in our worship services.” For details about the upcoming programs, please click here. 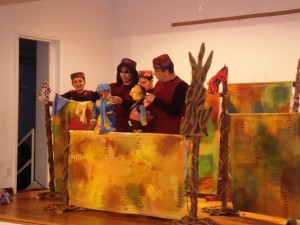 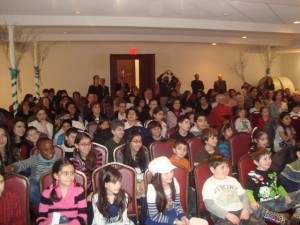 The celebrated State Puppet Theater of Armenia performed at St. Illuminator’s Cathedral, New York, on January 29. Two plays, “The Foolish Man” and “The Birthday Gift” were performed to a sold-out audience. Children of all ages, as well as their parents, enjoyed the talented cast, puppets, folk songs and dances. At the conclusion of the performance the audience joined the performers in song and dance. The event was organized jointly by Hamazkayin Armenian Educational and Cultural Society of New York, and St. Illuminator’s Cathedral. 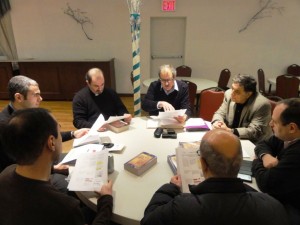 At the invitation of Rev. Fr. Mesrob Lakissian, pastor, and the Board of Trustees of St. Illuminator’s Cathedral in New York, a three-hour seminar was held for the board members on Christian Basics, conducted by Dn. Shant Kazanjian, Director of the Prelacy’s Armenian Religious Education Council (AREC), yesterday evening, January 25.

Huyser Music Ensemble fulfilled its promise of keeping Armenian music alive by giving a performance of a lifetime and kept the audience in joy, pride and tears. The performance earned standing ovations from an appreciative audience.

The PTO of St. Illuminator’s Day School in Woodside, New York, organized a book drive to benefit the Children of Armenia Fund (COAF). English-language books are in short supply and thanks to the PTO, students, and Rev. Fr. Mesrob Lakissian, books were collected and will be sent to the COAF schools.